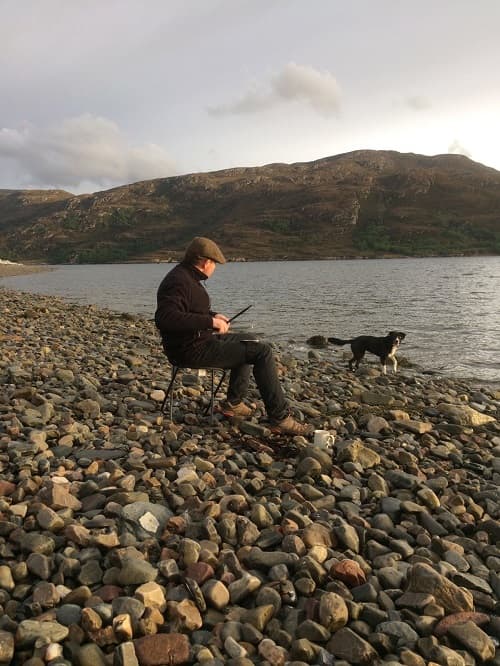 “14 months ago I went to see Chris to seek to improve my technique, with the hope that this would free up my playing of the hi-hat/ride cymbal, to enable me to broaden the range of music that I can play with my band. Chris has delivered on that goal, along with many other things that (after 35 years of playing a limited range of stuff) I never thought I’d be able to play. The range of Chris’ musical interests, coupled with his endless patience and relaxing manner mean anything is achievable with practice. If you want to improve your drumming to suit your interests (rather than just pre-set music grades) and have good fun in the process, then I’d strongly recommend lessons with Chris Joyce!” 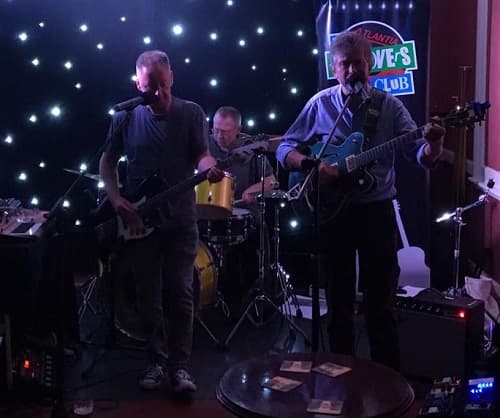 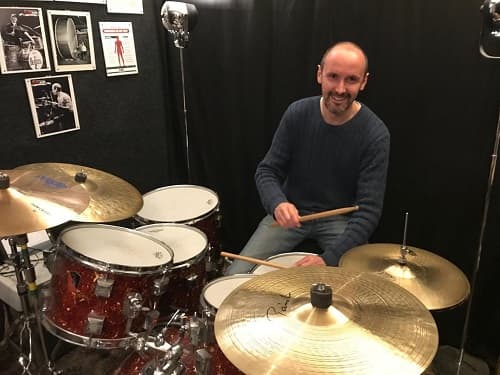 “I have been learning drums with Chris for the last twelve months and I really enjoy his lessons – he’s patient, and he tailors his teaching to my level of ability so that I always feel like I’m making progress. He strikes a nice balance between following my interests and exposing me to new styles and ideas, and he always makes me feel at ease. I leave every lesson wanting to practise more and learn more.” 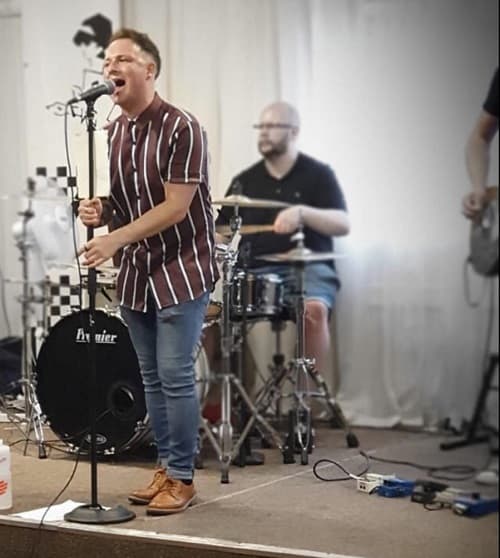 “I’ve been playing drums for a few years and was doing ok, but since taking up lessons with Chris my standard of drumming has improved massively. Chris has, in a short space of time taught me a lot about timekeeping, dynamics, stick control, musicality and so much more which I have been able to apply at the kit. Lessons are stretching and challenging, but equally fun and whether a beginner or advanced drummer, Chris has something to develop your skills further.”

“This is Ava drumming. Ava chose drumming as her hobby. Best decision she has made. She really gets alot from it. Teaches her to think differently.” 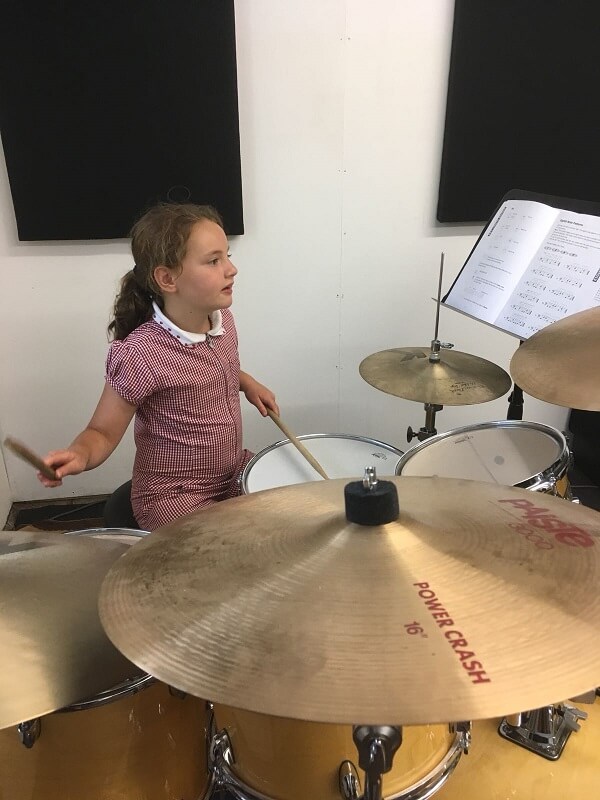 “My daughter Jodie-Mya (8) has been having lessons from Chris for the pass 2 years. She loves every minute of it. Jodie-Mya is one of Chris’s youngest students and although she is a very shy, Chris and his drums has bought her out of herself. Jodie-Mya always comes out of her lesson with a smile on her face, she even practises at home without being nagged. Chris always creates a relaxed atmosphere in his lessons and always makes them fun.” 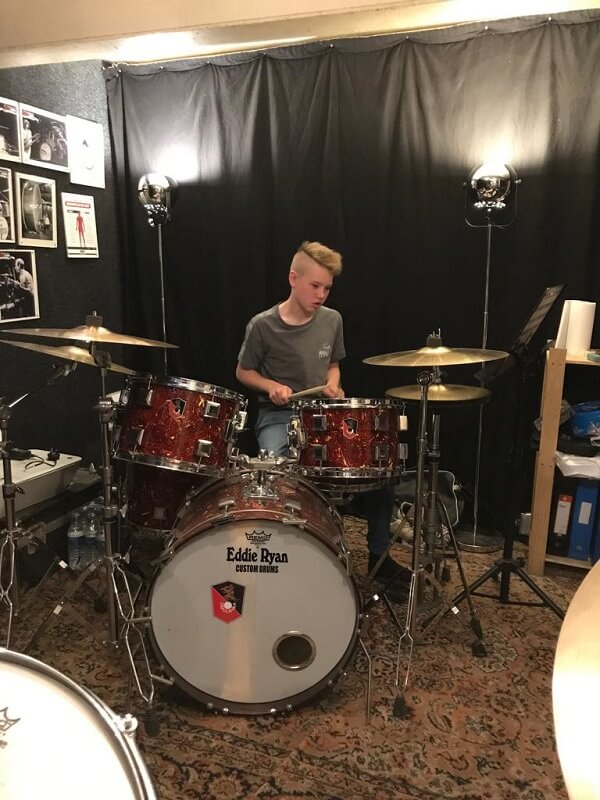 “From Rohan picking up his first drum sticks Chris has supported, encouraged, pushed and challenged him with a program developed by his years of industry and teaching experiences.” 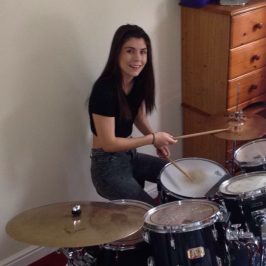 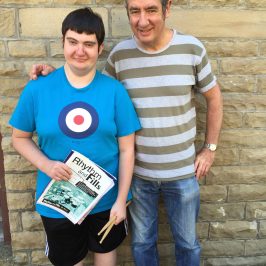 “My son Will has lessons with Chris every week and his drumming has come on leaps and bounds but just as important he is having a great time when he is there and everytime I pick him up he is always coming out laughing.

Chris is a talented drummer in his own right and has been there, wrote the book and worn the t-shirt and still plays in bands both here and across Europe. Chris has the talent, the knowledge, the patience and the ability to be able to pass his skills on to anybody willing and wanting to learn so if you or a family member want to learn or improve your drumming technique in a relaxed and well humoured environment then Chris Joyce Drums is the place to be.” 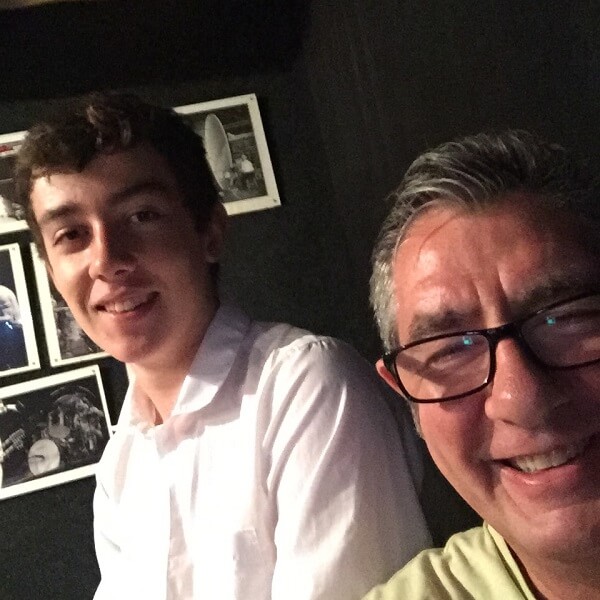 “Chris is a motivational and creative teacher. My son Ben loves his lessons with Chris describing him as ‘an excellent teacher who is easy to get along with, interesting and inspiring’. Chris’s commitment to his own musical development combined with his in-depth and broad knowledge means he can provide his students with a huge range of musical opportunities and experiences. I would highly recommend him.” 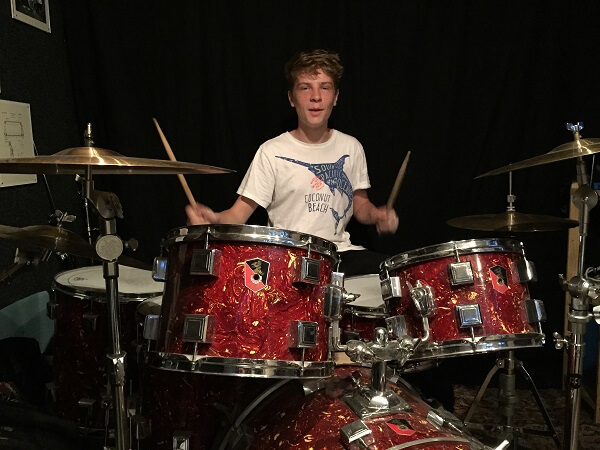 “Chris is not only a great drummer but also a great teacher. My son Greg really responded well to his dry, honest approach. Chris has helped him to develop a love of music and performing that will stay with him a lifetime. I can’t recommend Chris Joyce enough.” 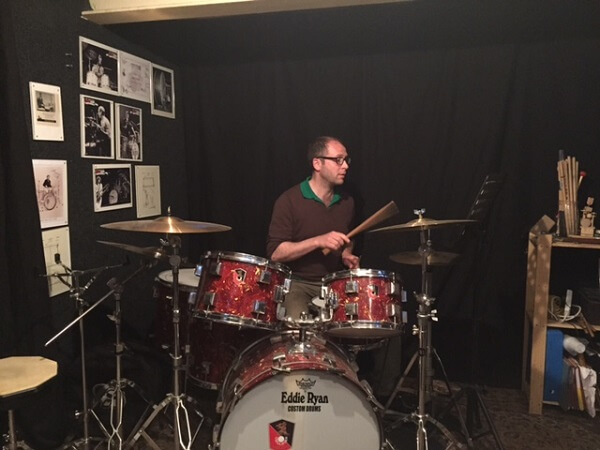 “I always have lots of fun and come away from Chris’ lessons feeling enthused and eager to learn the next thing.” 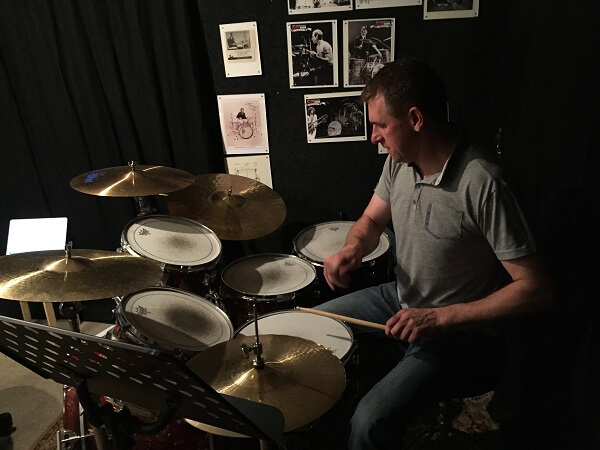 “I searched for local instructors, I left messages with three. Chris rang me and we spoke about what I wanted out of it. I have found Chris to be very professional and structured in his approach to instructing (not to mention patient).” 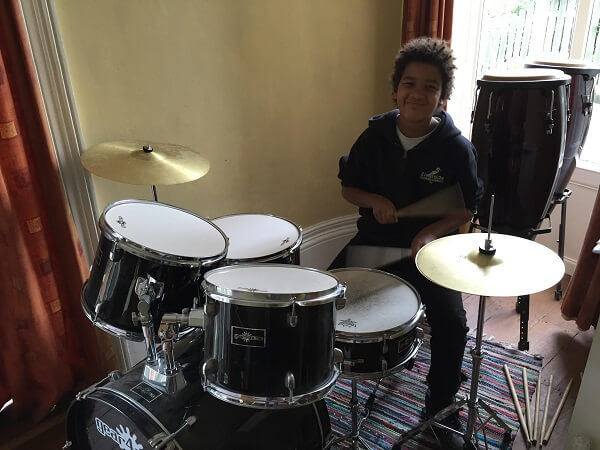 “My sons interest in drumming has been fuelled wonderfully by Chris who works Rafi hard during lessons but always comes out stimulated and happy. In addition to great progress in drumming skills, both Rafis self confidence and concentration has improved which is definitely partly due to lessons with Chris. I would highly recommend him as a drum teacher and mentor to any young person who is showing an interest in rhythm and drumming.” 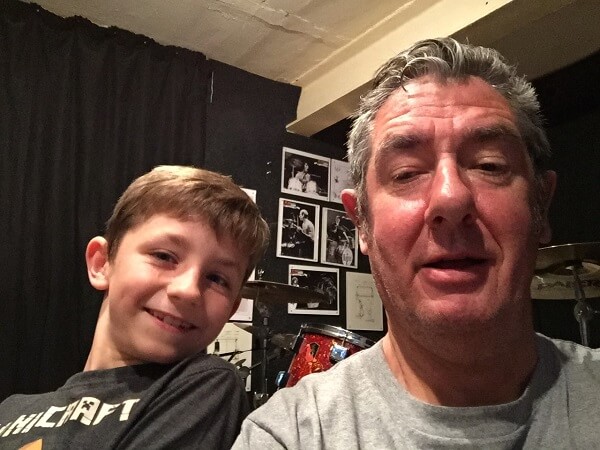 “Chris has been teaching my son Joseph (now aged 9) for over 12 months. Chris keeps the balance perfect between pushing Joseph to learn whilst maintaining the fun and interest. Chris not only helped us pick Joseph’s drum kit, he also assembled it for him, and has given him a couple of lessons at home to make sure it was perfect for him. I am sure Joseph will be being taught by Chris for many years to come – Thank You” 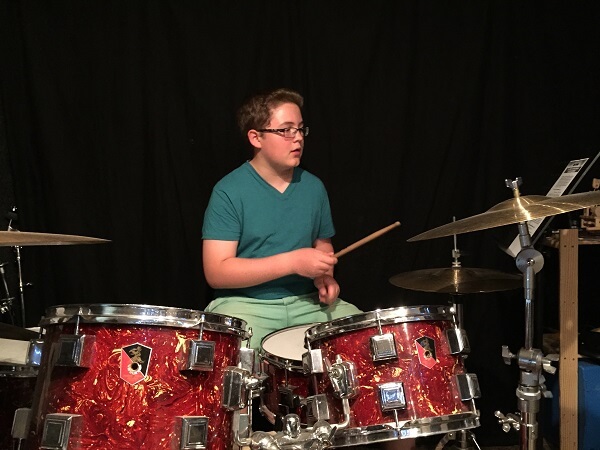 “My son Alfie has been having lessons with Chris since Y5 and what began as ‘think I might like this’ has turned into a grand passion and deep commitment. Chris creates a bespoke experience for the student and awakes, inspires and informs like no other. He is the real deal and I cannot recommend highly enough.” 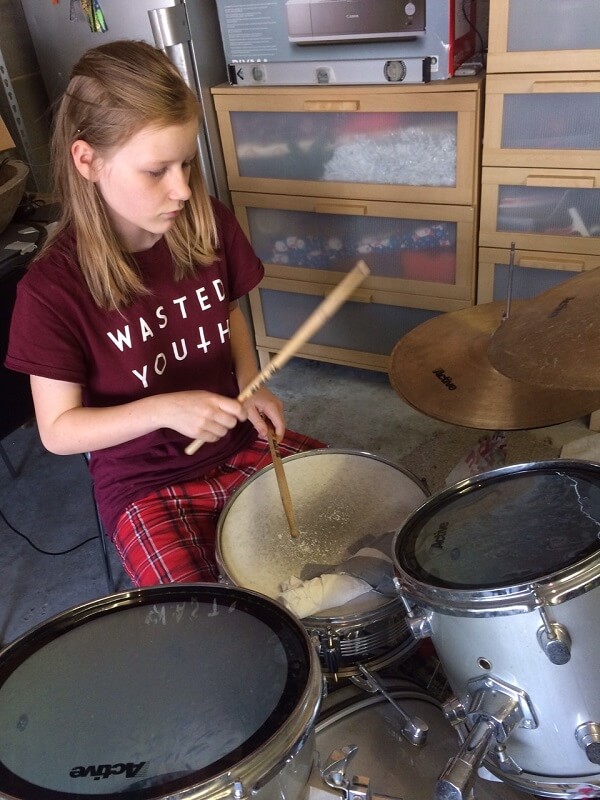 “Chris first taught drums to our son Jake and now teaches our daughter Ellie. They both really enjoy their lessons – Chris finds the right balance of structure and fun and its been great to see how they’ve gained self confidence and inspiration through drumming.” 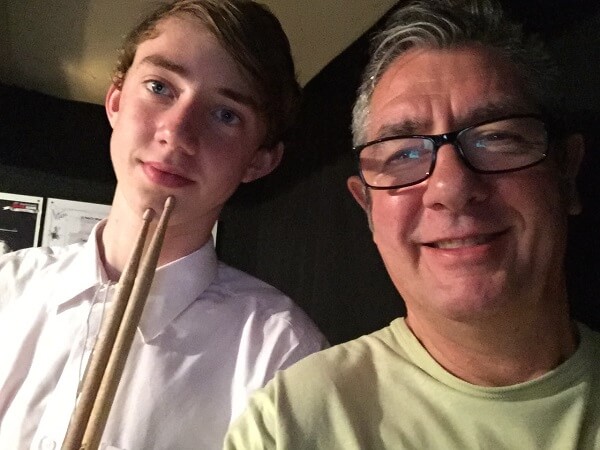 “Our teenage son, Joey, initially started going to the CJ Drum school for drum lessons with Chris several years ago. Chris let him choose his own style of music to practice and encouraged him to practice regularly at home between lessons. A little later Joey became the drummer for the Hebden Bridge Junior Band and Chris was able to help him practice all the different styles of music and beat that the band required him to play.

Joey also needed to develop his reading of drum notation and music not only for his own benefit but also because drum music reading was required for formal brass band competitions otherwise points would be deducted. Chris was able to help Joey progress with this and he has become proficient.

We are really pleased that Chris has managed to inspire Joey to keep playing and practising at an age when teenagers often give up their musical instruments and hobbies.

Chris is full of humour and has a great way with young people who respect him for his own abilities as a drummer and a teacher as well for his fame with Simply Red.” 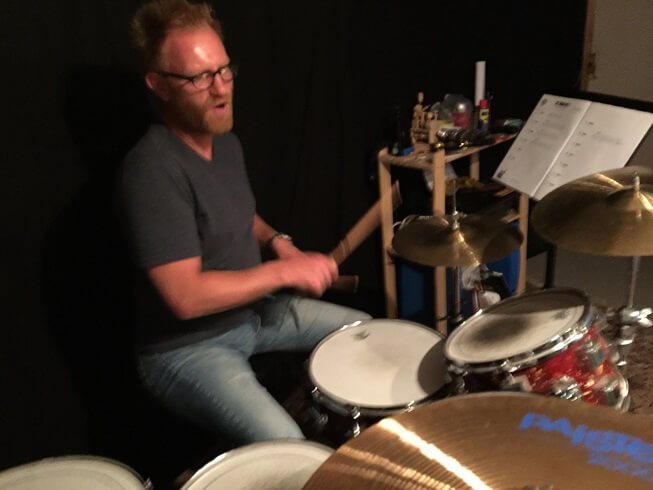 “For as long as I can recall I have had an admiration and fascination with the drums. From an appreciation of the sounds in my early years to being captivated by the live performances of live drummers I finally took the plunge and purchased a small electronic kit just a couple of years ago. During the first twelve I utilised various online material with varying degrees of success. Frustrated by my flat-ling I got in touch with Chris. We met up and had a good chat about the kit and equipment that I was using, and discussed the material that I had been using to date and what I wanted to achieve.

I have now been studying with Chris for over 12 months. Chris’s approach to teaching has been methodical and provided me with the structure and building blocks to develop my passion that was lacking from my previous ad-hoc approach. Whilst the lessons have been structured they have been far from bland or predictable. Within the relatively short period of time that I have been working with Chris I have learned to play a variety of styles of music including jazz and rock. I trust that Chris would agree that my playing ability has developed exponentially since working with him.

It is a genuine privilege to be taught by Chris. Each and every lesson offers something new and unpredictable, pushing the envelope of my abilities just that little bit further on each occasion. Chris has also been invaluable in assisting me with the purchase of a new acoustic kit and the construction of a drum studio for the same. In the absence of Chris’s unique style of teaching over the last 12 months I fear that I would not have developed to a standard to justify the investment in a new kit and drum studio within such a short period of time.

A big genuine thank you for your continuing help and encouragement on this most rewarding of journeys.”